“Sorry, I Forgot to Screw Up.”

Tonight was another night for a lecture series that I and my colleague Dr. Sarah Wee host at my home chapel: Music and the Liturgy, which serves to inform people about how the church liturgical tradition has influenced musical practices and vice versa. It’s one of my pet projects and a way that I can keep my research skills active—not to mention an opportunity to program works I’ve written myself to be performed (take note, composers!).

This particular lecture, falling in the same proximity as several other projects I’ve had to prepare for, had to be fully prepared on somewhat short notice, and one of the regular pianists for the lecture series wasn’t able to make this particular evening. As such, I’d found myself in one of my most uncomfortable situations: having to learn a piano accompaniment on very short notice, meaning I only had a few days to get the part under my fingers.

For those who don’t know me, though I’m a strong sight-singer and can certainly hold my own sightreading on single-staff instruments, keyboard sightreading has never been my forté. As such, it takes me longer to learn piano works than the average pianist. And since I already keep a full schedule, I don’t accept many short-notice piano and organ gigs if I can help it, unless the music is very straightforward and simple.

One of the two accompaniments was for Samuel Barber’s “The Crucifixion.” One of his easier piano parts, but that’s like saying a dart to the chest is less painful than a bow and arrow to the stomach. To pull it off, it takes big hands (check), quick meter adjustments without the courtesy of a time signature (check), comfort in playing atypical chord voicings (kind of check?), sightreading with hand crossings (not-so-check), sostenuto pedal work in conjunction with regular pedaling (uncheck), and fast hand resets (the exact opposite of check).

And of course, it requires all of those together at the same time…

Come on, Barber, seriously? We are not friends right now!

I mean, I get it. It sounds gorgeous. This is arguably one of my favorite things the man has ever written, which is saying a lot of a two-to-three-minute art song, and I’ve wanted a reason to play this piece for ages now. But these two measures, in conjunction with the two measures preceding it, made me rethink my capabilities as a pianist more than once. Those quick transitions in the left hand definitely left my fingers feeling sort of dumb.

So rewinding to the preparation process… I practice those four measures non-stop for a solid twenty minutes, as one does when they’re struggling. But I just can’t seem to get it quite right. It’s a wrong note here, a wrong note there, never the same wrong note at the same time so it’s nothing that can be particularly isolated. Slowing it down to a ridiculously slow tempo doesn’t help nearly as much as it should. Left hand forgets to move fast enough to hit the grace notes, the sostenuto pedal forgets to go down in time to sustain the right notes, coordination starts to go wonky–

Ding! I have a Facebook message. I wonder what that could be about?

Turns out to be a lengthy message from someone I haven’t heard from in a long time. Something requiring a detailed and delicate response. It’s definitely one to preoccupy my thought process as I jump back into practicing, deciding to do a full run of the accompaniment to see where it stands.

As I’m playing through the accompaniment, I’m so preoccupied with how I need to respond to this message that I get all the way to the end of the art song without even thinking about what I was doing.

Including those four measures I’d been practicing nonstop for twenty minutes.

The ones I had just played perfectly for the very first time.

And I had next to no trouble playing them from then on after that. 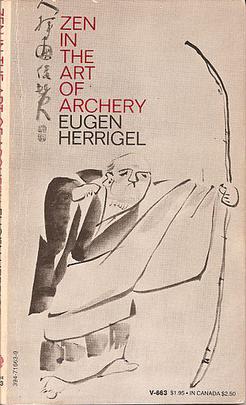 I’m reminded of a course I took in my doctorate on Musicology Pedagogy, with one of the most brilliant minds I’ve ever encountered in the field. Professor Frank Cooper was well into his 70s and had been teaching and actively researching for decades, known both for his high standards and stunningly insightful lectures. I had had several years of teaching experience and theory pedagogy courses under my belt by this time, so he gave me extra requirements to challenge my skills in the course (not being allowed to use handouts, being forced to rely on a Powerpoint, being barred from access to all classroom technology, etc.). It was one of the best classes I had ever taken in college, even if I felt wiped out by the end of it.

He ended the semester by reading us an excerpt from Eugen Herrigel’s Zen in the Art of Archery, a philosopher’s lessons from his time in East Asia. At first, the anecdote Professor Cooper was telling seemed completely irrelevant to anything pedagogy—something something archery techniques different from the West and so forth. But then he gets to this sentence, one so noteworthy all I had to do was hop over to Wikipedia to find it without even looking it up:

“The archer ceases to be conscious of himself as the one who is engaged in hitting the bull’s-eye which confronts him. This state of unconscious is realized only when, completely empty and rid of the self, he becomes one with the perfecting of his technical skill, though there is in it something of a quite different order which cannot be attained by any progressive study of the art.”

Ceases to be conscious of himself, hmm?

Professor Cooper went on to explain that, to a certain degree, we as educators had to make our craft not about ourselves or our own role in it. If we are adequately trained, our thought process should always begin with the sensation that the material is meant to be taught, and all we are is the vessel by which the material presents itself. The more we micromanage our lesson plans, the less effective our teaching overall might be, because we start to get in the way of our own natural instincts and habits.

The same has applied to performance all throughout my life without me even realizing it. There are pieces of music that I learned years back that I can still pull out and play without a second thought (Brahms Intermezzo 118 no. 2, anyone?) and it might be a little sloppy or rusty, but it will still be there and present without my brain engaging completely at all. But the one moment that I stop playing in the middle and try to pick back up where I left off (“Oh, sorry! Yeah, I’ll call you back in a minute, okay where was I…”) is the moment my hands lose their place and I can’t get my bearings. I don’t even need to be interrupted; it can be a thought as simple as “What fingering should I use for this section coming up?” before my hands come completely untied.

The moment that I give my hardest effort to not screw up is the very moment I start making mistakes and need to recover.

I love playing the organ for church services; it’s an instrument that embodies the very essence of multitasking. You have to play the melody to this anthem on one keyboard, play chords on a different keyboard, a bass line with one foot, open a swell pedal with your other foot, pull a stop out during a break in the phrase, read the lyrics on one page, read the music on another page, silently scream at the one choir member who’s lagging behind (again), all while remembering that you need to hire another musician for Easter vigil and oh, by the way, it’s been raining, so the E-flat pedal might be out of tune again—

If you’re asking how I can process all of that information at once, the answer is deceptively simple: I’m not! I’m trusting my hands to do exactly what I need them to do while I focus on the one task at hand (usually dragging along the sluggish choir member). I’ve practiced all of the other things to the point that I can trust my hands and feet to do their job. I can forget about them for a moment and let them do their thing.

But in the practice room (that is, when the chapel is empty), without the aid of a congregation to “distract” me, I get in my own way. And I have to find some other way to mentally disengage just enough to be productive.

The best hymns are the ones where I’m reading the words to decide what registration to use for the next verse, not the notes of the next measure I might screw up. The best postludes are where I forget that I’m a “bad organist” and get over my insecurities about not as being as good as the guy downtown who specializes in organ performance. The best preludes are where I’m having to improvise while looking out for the priest because everyone’s running late that particular morning, not when everything’s on time and the only thing I can focus on is how well or not well I’m playing that given Sunday.

There is a time and place to focus on your mistakes. The practice room is the sanctuary of honed craft (and not just the night before your next lesson). But when performing? There’s a different sort of ironclad focus that needs to take place: that of getting out of your own way and letting things happen the way that they were intended. That arrow was built to hit its target. That piano was built to be played. That lesson was meant to be taught. All you, the trained expert, are is the vehicle by which the things that are meant to be will take place.

There’s a delicate balance there that I wish I had more often than I do. But when I forget to screw up, and just let the arrow hit the target it’s always wanted to hit… that’s the best feeling in the entire world.

Oh, and I of course made some new and interesting flubs tonight in the performance. But I’ll be damned if those four measures weren’t spotless.